Cooking for me is very stimulating. It combines equal portions art, science and adventure! Every new dish I prepare is like a journey of discovery which I feel like sharing with others, and hence this blog.

I’ve always loved cooking, first with my mother and then since marriage, with my mother-in-law. Both of them have taught me many of the dishes I’ve cooked and also encouraged my interest in learning about these dishes. While my mother’s cooking was mainly from south Karnataka, my mother-in-law’s is from the coast, mainly the Udupi/Kundapura region.

Since moving to the US, I’ve also been exposed to many other cuisines from around the world. Trying them at home, and making them a success has been a very satisfying experience.

I hope you find something you like in my blog. Do try these recipes and let me know if you like them. Your comments will be highly appreciated!

This dish mainly originated in mid twentieth century. Some believe that it was a sauce created by a restaurant owner … Petti who was near closing his restaurant one evening, found a group of customers sitting at one of his tables, Petti was low on ingredients and told the customers he didn’t have enough to make a meal. They started complaining and said it’s too late and they are hungry. “Facci una puttanata qualsiasi (Make any kind of garbage),” they insisted. At that time Petti had nothing more than tomatoes, capers and olives, so he used them to make a sauce for the spaghetti and later from then he included this dish in his menu as spaghetti alla puttanesca- source history of pasta puttanesca.

I personally love this sauce, it has wonderful taste of capers, olives, tomatoes and herbs. Its jam-packed with intense flavors and very simple and easy to make.

Black pepper and salt to taste

Heat a large skillet over medium heat, add oil, chopped onions, garlic and red pepper flakes. Sautee until the onions and garlic are translucent. Then add  chopped olives, capers, tomatoes and bring them to boil. Simmer and heat the sauce for another 8-10 minutes. Add pepper and salt according to your taste and garnish with parsley.

Toss the sauce with pasta and serve with bread and cheese/olive oil, vinegar mix.

A great combination made of simple vegetables! My son loves anything green on his plate, whether its spinach soup, green gram dosa, cooked peas… etc. This is one among his favorites and loves to finish up his plate very quickly which doesn’t happen that often. 🙂

The combination of potato, spinach and fresh ginger and garlic with the spices brings a wonderful aroma and makes you feel ravenous! 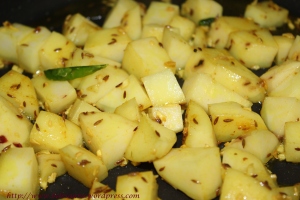 Close a lid and allow it to cook until the potatoes are tender (about 6-8 minutes). Now add the chopped spinach and coriander powder and stir it well. Add salt if necessary. Allow it to further cook for 3-4 minutes. 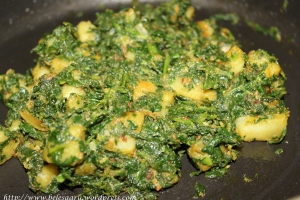 Turn off the heat.  Serve hot with rot is or parathas! 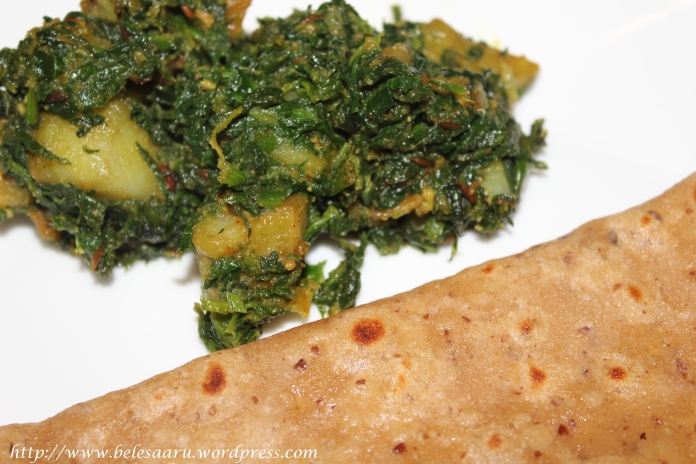 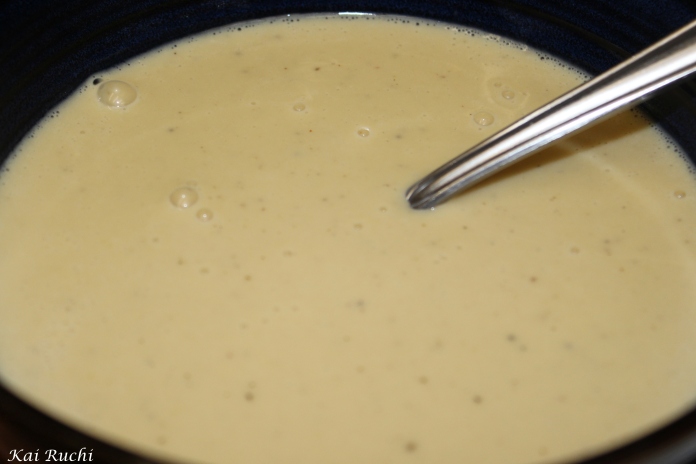 I was organizing my pantry last Sunday and found a can of artichoke hearts. Well what can I say, any dish with artichokes are favorite for me and my husband. Two dishes I had in my mind was artichoke spinach dip and artichoke soup. I was lazy enough to go grocery shopping for mayonnaise and spinach which I was running short of, never the less I had all the ingredients for the soup at home and hence prepared this hot artichoke soup for our wonderful evening.

Chop Potatoes, white part of leek, garlic and keep aside.

In a medium saucepan, Heat olive oil, add chopped leek and garlic.Sauté until translucent. Add potatoes, artichoke hearts and broth. Sprinkle salt and pepper, cover the pan and boil it for 20 minutes. 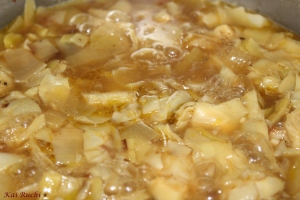 Once cooled blend everything together with heavy cream. Bring the blended mixture to heat and serve hot! 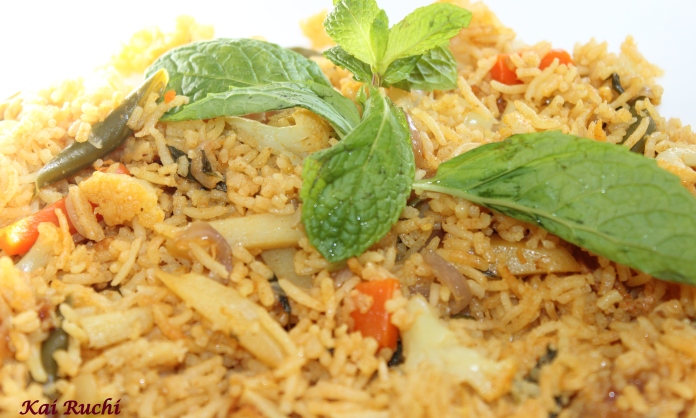 I met my MIL’s cousin a few months ago, she is so friendly and an enthusiastic cook. She cooks a variety of dishes from different parts of the world, She had an opportunity to travel around the world with her husband during his career and thats how she learnt  so many cuisines amazing well. Tehri is a dish which I learnt from her and is a favorite rice dish in our family gatherings.

Soak washed rice in water for half an hour. In a pan add ghee, when hot add cloves, cinnamon, tej patta. Add onions and roast until golden brown. Now add green chillies, crushed ginger and garlic, fry for a minute. Add all the vegetables, coriander powder and chilli powder(adjust the level of chilli powder according to your spice level). Add salt and mix well. 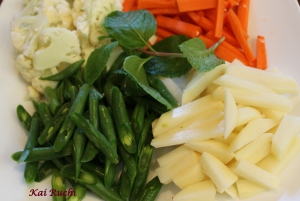 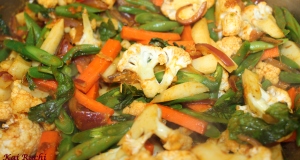 Drain the water in rice, add the vegetable mixture, mix well with rice. Add 1 and half cup of water and cook until done. ( I cooked the rice in rice cooker). Serve hot with any type of  raita.

This is a must try for garlic lovers. Garlic as known to everyone, has lot of heath benefits, it is a wonderful seasoning to add aroma, taste, and added nutrition to your dishes. Garlic pickle for me is  irresistibly tempting to eat with hot rice or dosas.

Heat olive oil in a vessel(can use peanut or sunflower oil too). Add garlic and fry until golden brown, add all the above ingredients mentioned. Cook for 10 minutes or until you see little oil floating on top. Add salt to taste and mix well.Can store the pickle in the refrigerator for  a long time.

PS: To make mustard and fenugreek powder, dry roast 3 tbsp of mustard seeds and fenugreek seeds, grind them into fine powder and then use it.

Guacamole is a avocado based dip which goes well with tortilla chips. I was first introduced to guacamole when I was in California.  It really has a unique flavor and taste and once you have tasted you get addicted to it. Avocado itself  has a very good nutritional value, it is rich in mono saturated fats, potassium, vitamin B, E and K. Its very simple, quick and a healthy recipe.  All in all its a great snack to munch with chips anytime of the day.

I am always inspired by dishes that I eat at a restaurant and have the habit of mimicking it at home, of course with a little help from search engines from the web. This is one such recipe which I absolutely fell in love with when I had it in a Thai restaurant. It takes less ingredients and time to prepare this salad.

Take a lettuce leaf. Add the mango mixture in the centre and sprinkle the dressing as per your need.

Garnish with cilantro, basil leaves and roasted coconut. Now wrap the lettuce so that the mixture do not fall from any openings and enjoy!. We can make four lettuce wraps with the above given measurements

Optional:  If you do not have lettuce, you can have the salad by itself.